Thoughts on the DriesNote: Towards Drupal "Contribution Credits"

Two weeks ago at DrupalCon Amsterdam, Dries Buytaert gave his traditional State of Drupal, or "Driesnote", presentation, outlining his thoughts on scaling open source communities. I thought it was one of his best presentations to-date: addressing a pressing concern within the community with both a philosophical outlook and some specific proposals to start a wider discussion. It's a pressing topic, and I wanted to add my own two cents before my thoughts became too stale.

What Is To Be Done?

This is a follow-up to my previous post on Gentrification, which received quite a few thoughtful responses. Thanks to everyone for those. I really appreciate the stimulation.

So far I've ducked the question of right and wrong. My mode was one of reflection on my experience of living in places that are changing, being a part of that change. However, the themes of development and displacement have a moral dimension. People naturally go right to this; so why fight it? Let's get into it!

On The Ethics of Knowledge Work

Recently I tried out the service "99 Designs", largely with good results. However, this got some pushback from peers of mine in the web development community, which prompted a good bit of thinking on my part about the various ethics and contingencies of Knowledge work and Digital Labor. So, here goes.

I'm sympathetic to the "No Spec" movement, especially when considered in the historical context of design and creative as a profession. To this day, much of the business of design involvs doing the work first, "on spec", and then only getting paid if the client liked it. If you're a fan of Mad Men, you've seen this. Don Draper forces Peggy and the gang to pull an all-nighter in a desperate bid to try and land a big new account. It's a staple of the show.

At its most extreme, the spec work process requires a completely finished product before payment, and a buyer will solicit this from several different individuals or firms, ultimately choosing only one to get paid. Or in the ultimate dick move, choosing nobody and "taking the campaign in-house" — which usually means stealing the best ideas and assets but handling the final execution internally, without paying anyone.

Clearly, this is no bueno: as one of my internet heroes Mike Montiero says, "F-you, pay me".

But, It's Maybe a Little More Complicated

In Which I Contemplate Capital Gains, Aristocracy, and Romney

The other day I tweeted a paraphrase from one of my favorite bloggers Atrios regarding Mitt Romney's tax returns that went something like "the tax rate on any money the pile of cash earns is much lower than it is on the money earned by people who actually work." A couple people asked me to explain this a little more so I thought it would make a good bloggy topic.

Since I'm over in London, I pick up on local news, which has been full of fallout from various austerity programs designed to roll back pensions, housing subsidies, etc. Firefighters, Tube workers, and BBC journalists are all threatening strikes. There's also been a lot of coverage of the widespread strikes/shutdowns in France.

Incomes Data Services, who conducted the research, said bonuses paid to directors of FTSE 100 companies increased by 34%, while basic pay rose by 3.6%. The amount of money waiting to be disgorged from long-term incentive schemes soared by 73%, to a total of £259m, and share option gains leapt by 90%.

The FTSE 100 rose by less than a fifth over the same period.

Steve Tatton of IDS said the report suggested that companies returned to "business as usual" once the recession ended.

This is an economics article, so it's important to note that the phrase "once the recession ended" refers to the technical end to contracting GDP. As we've increasingly seen by most other measures, the real impact of the "Great Recession" is likely to persist. Incomes for normal people remain depressed (or are falling) and unemployment is high. It is a "jobless recovery," and cold comfort indeed to anyone feeling the pain right now.

It sounds very much like there is a storm a-brewin' designed to start cutting into Social Security. I helped fight this off back in 2005, and it's a real pity to see the same basic bullpucky return under Prez. Obama. Cutting Social Security is both unnecessary and cruel.

For the reasoned economic analysis, keep up with Dr. Krugman.

For a more colorful take, you can't do much better than George Carlin:

How does this sound?

“The state should not tear down the apples from the tree of economics. What the government should do is help grow our apple orchard, develop our economic environment.”

The question I have is why does the President of Russia (in translation, even) seem to have a better grasp of post-free-market-fetish economic rhetoric than our own progressives? I mean, it'll be really unfortunate if the Left in the US doesn't come to articulate a competent vision alternative vision to the current "world order." Though maybe not all that surprising.

Apropos the previous posts about political power-grabbing and whistful public longing, and after a quick trip through the Jon Robb link farm, another thought I'd like to log for the register: in this crazy modern era of ours, in which the existing system is fumbling more than the San Diego Chargers, how long before we really start to think outside the box. Like waaaaay outside the box.

For instance, just off the top of my head:

My parents generation was willing to question pretty basic assumptions about how they were supposed to live. It didn't all work out, but it was a worthy exercise I believe. I think my generation is in an even more (potentially) radical space, thanks to these here internets. Not only can we interconnect with like-minded folks around the world with unprecedented ease, we can self-publish, self-learn, and figure What Actually Works in ways that were completely unthinkable to previous generations.

It looks bleak in some ways, but in other ways it looks pretty bright and wide open. Bears remembering. 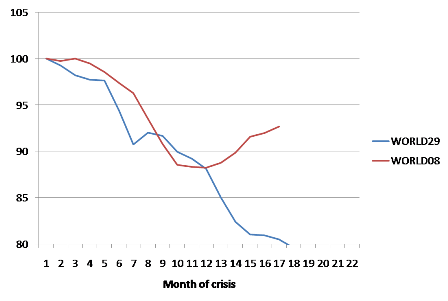 I guess my dreams of washing out and starting a second career as a tin-pan-alley vaudeville hobo will have to wait.

Towards a Non-Charity Based Argument for Reducing Inequality