I'm a father! Something I've wanted for a long time, now a glorious, bewildering, exhausting, inspiring reality in the form of a beautiful baby girl.

Her name is Jiya — pronounced "Gee-ah", like Gia that trashy Angelina Jolie flick from the '90s — and she was born on February 18th here in San Francisco. She and her mom are healthy and happy as can be, and I'm doing my best learning on the job as a dad.

It's a trip, man. All the clichés are true, which is what makes them cliché. But it's objectively bizarre how such a massively life-shifting event can feel so normal and natural, even as it turns everything upside down. The sleep deprivation is no joke (and I have it relatively easy compared to Rina), but even that quickly just becomes your new reality. It's worth it just to see her smile. Oxytocin is a hell of a drug. Humans are endlessly malleable. And so on. Like I said, all the clichés are true.

Something I didn't expect: I've had a bunch of early life memories resurface. Not of myself at Jiya's age of course, but long-forgotten moments of my sister Brie as an infant, lullabys overheard, scenes of life with a baby up close and personal. Like, flashing back to being bizarrely afraid of that little stump of umbilical cord that hangs around for a while. These are all things I remember, obviously, but I also can't remember the last time I remembered them, if that make sense. Guessing there will be more of this down the line.

Also, having a daughter is making me a louder and prouder feminist. It's how I was raised, but like most things I've felt radical passion for, those feelings have mellowed with age. Partly that's a matter of learning the limits of what confrontation can achieve, some expanding empathy and appreciation for nuance, and definitely hard-won lessons in the fine art of picking one's battles. Also, if I'm honest it's a bit me growing more muted as I've become conscious of the hypocrisy implicit in being an imperfect man who wants men to be more perfect.

But all that went out the window once I knew I was having a daughter. The stakes are too high to be relaxed and demure, and playing it cool for sheepish navel-gazing reasons just won't fly.

The moment I knew was when that new Drake song dropped in the fall. Yes, honestly, the catchy beat and dopey video. Now, Drake's a relatively "nice guy" from a persona standpoint, and there are vastly worse things in the top 40, but the lyrics (basically, he can't handle that a girl he used to have as a shut-in bootie call now has a life of her own) made me realize all over again women occupy an unacceptably subordinate space in society, and I don't want my daughter to grow up under those conditions if there's anything I can do about it.

So in keeping with the Canada theme, count me in with Justin Trudeau, their dreamy new Prime Minister:

With that and his treatment of refugees, he's an embarrassing reminder of what decent social leadership looks like.

This is an example of a broader phenomena I've self-observed over the past nine months, which I'm calling "the return of big thoughts." Again, if I'm honest, over the past decade or so my sense of scope and ambition for life has gradually diminished. Changing the world begat doing my thing begat making sure that me and mine are gonna be alright.

Paradoxically, upping the ante on what's "me and mine" has generated a jolt of new energy for caring about the bigger picture. It feels like another borderline cliché, which is why I'd call it paradoxical rather than ironic, but it's a real thing, and I think I like it.

So here we are, the dawn of the Daditude era. More to come. I still don't go on Facebook all that often, won't be posting many photos online, and I really don't foresee myself becoming an ardent dad-blogger or anything. Maybe that'll change and I'll be a Purity Ball crusader. Who knows! As they say when you become a parent everything is up for grabs, from your consumer preferences to your cultural self-identity to your spiritual beliefs. 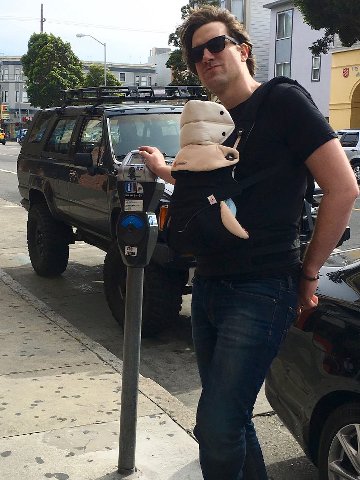 All photo credits go to Jiya's co-creator and the love of my life, Reading Rina.
Tags:
authentic experience
daditude