I got a little email which told me the name of my favorite art piece from last year's Burning Man, which got some press, which led me find it on YouTube, which let me share it with you.

The spinning is powered by a number of bike stations around the structure, and the strobing is keyed to the drums, so it's a group effort to make it happen. Sweet.

Anyway, I'm in the Bay for a couple weeks. Insanely busy as always.

I'm in the paper! You can see why my back was so screwed up yesterday, and yes those are my underpants on over long-johns. I was told that was the right way to dress for the team.

Also, there a nice photo from Roller Derby with our friends Hanna and Sarah in it. 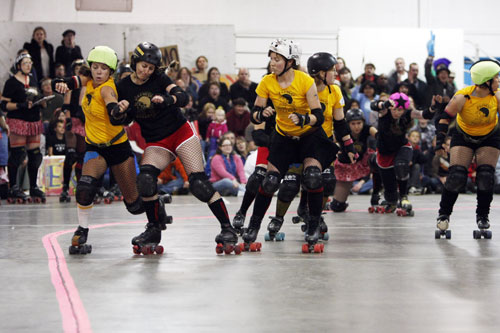 So after this weekends Kinetic festivities and my own automotive troubles, I feel it's appropriate to take note, again, of the hard facts facing humanity.

Things are going to be different. The price of gasoline is not going to reverse its trend this year, or the next. The rate of CO2 saturation in the atmosphere is also not going to turn itself around for some time, even under ideal circumstances. Things will change.

And we'll deal with it. That's the main thing to keep in perspective. The world will not end. Humanity will not be extinguished. Our particular configuration of civilizations cannot persist indefinitely, but it's not as though we're doomed as a species.

Rocks from space could come close to wiping us out -- real mass-extinction events do happen -- but even in that kind of case it seems highly unlikely to me that humanity (let alone life) would go into the wings.

It's important to resist apoclyptic thinking. This is something that's wired into us as people, a weakness for believing the end is nigh. It's an idea that pops up throughout history, and it's never correct. Which is not to say that terrible tragic things don't happen, but that the rapture never comes, and even sweeping watershed changes take time.

And even better is remembering that dealing with it can be fun. Like these biodiesel cats in Colorado who cut a deal w/New Belgium Brewery:

Man, I feel like I get beat with a sack full of doorknobs.

Rolled with the Kinetic from 8am to 7pm yesterday, then to the inugural bout of Humboldt Roller Derby, and then the dancy afterparty. Lots of screaming, bike riding, tugging machines up sand dunes, tailgating, screaming some more, jumping around and carrying on.

But hopefully with a couple cups of coffee and some Motrin, I'll get through enough work today to take tomorrow off for the finish-line run of the race. Its good to be out doing things.

Bad news. My truck is going to die.

Well, that's melodramatic. I learned today that the clatter I have at certain acceleration points is not a timing issue, but rather a piston bearing on its way out. Now, the truck can run on three (even two) cylinders, and there's no reason to think the bearing will go out any time soon. But it's an unknown. Could be tomorrow. Could be six months.

That means it's probably ok to take to town, but no running the 101 to San Fran. The risk/cost of blowing the engine out in the middle of nowhere is too high to run.

So what's next? Well, next week I'll roll south in a one-way rental. After that I might try and use a new connection to get some air travel in coming back up in June. But I'd been planning on driving this summer, piling up wedding trip and family visit, etc. That's no one-day stop-gap rental.

I see a few options:

In the back of my mind I've been sort of planning towards the last and final option, but was thinking sometime in '09/'10, not right now. I don't feel excited about taking on a big new debt right now, and I have a feeling that when it comes to automotive technology the longer I can wait the better my options are.

I need to seriously get my rear in gear on some copyediting, but this is pretty exciting stuff.

By Request: My Opinion On Gay Marriage News

Yarwood asked for it, so here's my response to this week's big legal/political news out of California:

The California Supreme Court struck down the state's ban on same-sex marriage Thursday in a broadly worded decision that would invalidate virtually any law that discriminates on the basis of sexual orientation.

The 4-3 ruling declared that the state Constitution protects a fundamental "right to marry" that extends equally to same-sex couples. It tossed a highly emotional issue into the election year while opening the way for tens of thousands of gay people to wed in California, starting as early as mid-June.

What I like about this is that the decision is broader than just gay marriage. It's gay anything. It's taking the moral high-ground of saying, "you can't stop people from doing X just because they're homosexuals." That's the right way to go, in my opinion.

This is going to move the ball forward and probably lead to more states doing likewise, which will lead to an inevitable showdown over whether homophobic states will be obliged to recognize marriages imported from more progressive climbs, and of course over how the federal hydra should react.

Personally, I think that the question over the magic word "marriage" may be a sticky wicket, and I'd be in favor of some kind of national normalization of the financial and legal aspects -- which is historically what it's all about, let's not forget -- and a decoupling of the State from the religious, spiritual or moral dimension of things. Any couple of consenting adults aught to be able to make this kind of union, and I think it's right and good that we encourage this as a society by recognizing special rights, providing tax incentives, etc. Beyond that, the government shouldn't have much to say about it.

I have a delightful memory from last summer, of Friday night at Burning Man, being out and about with two beautiful girls from Portland we met; real underground babes with dynamite style, impeccable festival pedigrees, and at least a decade's worth of world traveling and other bohemia under their belts, all without ever showing taxable income. "Gone chicks," an older generation of beat writer might say. I wrote about this obliquely before, but never told the story itself.

We'd met earlier in the week when they sheltered with us through a dust storm, and bonded over knuckle tats and their delicious lavender vodka cocktails, just a good honest click with the whole group, and so naturally it seemed we should all rendezvous and ramble the night together. Though the whole pack started out as one, the girls and I got separated from Mark and Zya fairly early -- no worries, just the way things flow -- and the three of us ended up making a great convivial loop of the grounds on foot over the course of the night, dance party to dance party to dance party and yon.

The Heat of the Moment

It's 80 degrees in Westhaven! Sort of a miracle even for summer. I'm going out to check out some potential local office spaces.

Things have been good. Work is a little harder when I'm not in the office. There are social dynamics I can't keep spinning when I'm out of town. In the long run these plates need to spin themselves (with the aid of ye olde partners) but in the short term it looks like I'm the secret sauce.

Personally I'm still recovering from a hell of a weekend. Good, but left me feeling a bit dazed and behind on things. I had a real live date though -- a fulfillment of my "power-dating" mandate, even -- which went pretty well, although with schedules being what they are who knows when a second rendezvous might occur.

I have a shit-ton of photos from the party too. If you're on facebook you can peep them there. I'll try and get something up on Flickr too. Lots of excellent knuckle tats.

Anyway, apologies in advance to everything I'm behind on. I will be playing catch-up over the next week/end I'm sure, but you're all in my heart and thoughts.