The Passionate Persian Speaks, granting an interview to Mike Wallace on 60 Minutes.

It's actually a pretty bad interview. Wallace is not sharp, Ahmadinejad (politician that he is) isn't interested in getting pinned down, and the added element of translation really takes the zing out. However, it's interesting and worth seeing, if only because we get a lot of information about Iran/Ahmadinejad from a lot of other sources, and it's worth seeing what the man himself looks and sounds like.

Even more interesting is the commentary from readers. Here are three in a row, verbatum:

Almost all posters here need to take a logic course.

I can't really offer further commentary on the commentary. Sort of speechless.

It's been a wild week, the "last week of summer" as some have called it. Julia cooked us a series of encredible meals in Weshaven, with ingredients I've never heard of, tastes heretofore unknown, richness and flavor previously unimaginable. The coup de grace was a pork shoulder. It was one of the best dinners I've ever had in my life; no joke. I wish I'd thought of taking some pictures.

So I'm back up in Oregon for a short spell. Last night was Cian and Ashley's wedding ceremony. They actually got married back in December, but hadn't had a party for extended family and friends. Cian's sister set up a great spread in her back yard and we all got too drunk and there were fireworks and a midnight burrito run and a morning of pure teenage hangover death, then Vegan brunch. Good times. Again no pictures. Sorry.

We're now staring down the barrel of Fiscal Year 2007, time to get back in the business of getting shit done. I've got to start making some careerish moves. The summer has been a horizon-broadening experience, and now it's time to get to the next step. Lots of ideas, and still evolving.

In the three years since Bush invaded Iraq, the average retail cost of gasoline has doubled.

It's not blood for oil, really. It's blood for oil company profits. After all, the important part of "black gold" is the "gold."

You know what else has doubled since the Invasion of Iraq? Exxon's Stock Price. Just sayin'.

We have a bit of a probem here in America in that a bunch of people sort of lost their minds after 9/11. I was there. It was a bad fucking day, and a deeply weird and sad and confusing time for a while after, but some folks seem to have taken a harder swerve than others. A few seem to have never returned.

When the shit went down I was in a meeting in Midtown, pitching some older guy for funding on a business plan I worked up with my man Peter Crawford. Once we got the gist of what was going on, that this wasn't some terrible tragic accident, this older fellow took a quick and savage turn of mind, going off on a diatribe about "flamethrowers in the foxholes" and "the sands of Iwo Jima."

That's fine and all. Vengance is a deeply human desire, especially in the immediate face of such a monsterous act. But I think a lot of people took two steps down that path and never looked back. Now it's going on five years later, and we have the likes of Joe Lieberman claiming:

"too many people... donâ€™t appreciate the seriousness of the threat to American security and the evil of the enemy that faces us â€” more evil, or as evil, as Nazism and probably more dangerous than the Soviet Communists..."

This is, not to put too fine a point on it, fucking insane. Mark Schmitt at TPMCafe:

[U]nder any possible definition of "threat" or "enemy" it cannot possibly be as dangerous than the Soviet Union at the peak of the Cold War, with multiple thermonuclear devices pointed at every one of our cities and towns. And, I donâ€™t know exactly how to score "evilness," but not much matches Hitler. I suppose in some way bin Laden and Zawahiriâ€™s hearts may be as filled with evil as Hitlerâ€™s or Stalinâ€™s, but they donâ€™t have the SS and Luftwaffe at their disposal. Maybe they would send us all to concentration camps if they controlled half of Europe, but thankfully, they live in caves and canâ€™t use the phone.

I'll reiterate: I experienced 9/11 live and in-person. I have no illusions about the committment of terrorist networks to strike at the US, their willingness to destroy innocent human life to do so, or the threat that this represents. However, looking at the statements from the likes of Joe Lieberman, Dick Cheney and company, I can draw only one of two conclusions: either these people have gone off the deep end, or they're among the most cynical and manipulative fearmongering douchebag demogagues to ever hold positions of power and authority in this country. Crazy or criminal, take your pick.

UPDATE: Likewise, you have pundits like Andrew Sullivan who are trying to stake out a new position against the war, but who still need to peddle the belief that people who are (and always have been) anti-war (which is to say: right), are still somehow "unserious" and have not in the past four years put forward alternate proactive strategies for dealing with the problem terrorism presents in particular, and/or the problems of the Middle East in general. This is willfully-ignorant dishonest bullshit. The Editors rap it down.

No, not "fat babes," obiese infants.

There's something deeply and thermodynamically wrong going on with our country. 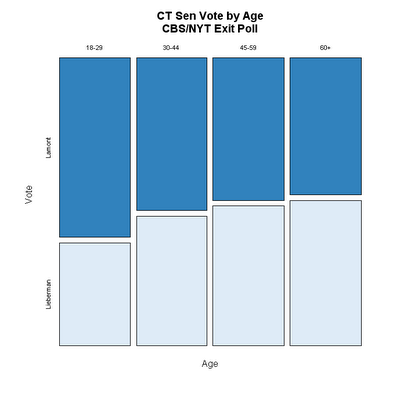 More on this front on Future Majority.

The Lieberman defeat has electrified activists nationwide, showing them that the most powerful, entrenched establishment figures are not safe from people-power. Tuesday wasn't a morale boost, it was proof that we could accomplish the politically impossible.

Although I rarely wade into the commentary section on the old DailyKos anymore, and I find myself often skimming the front page for headlines, the man himself still has a good visionary sense for things, a sharp and refreshing take on a lot of issues, and can really turn a phrase to boot.

I think he's right on here: the Lamont campaign is proof that the concept which Dean rode out of the gate -- internally challenging the establishment in an effort to pull it around -- can in fact succeed. This is a slow and lengthy process, fraught with setbacks and disappointment, but it's not a waste of energy in my opinion.

Simply put, there is no conceivable social action that can rival the political process in terms of return on our investment of time and money. A presidential election costs $200M and 100s of 1,000s of volunteer hours. That's a lot of cash and effort, but at the same time, when you win, you're directing a budget that's about two thousand times as large. There are strings attached all along the way, but there's nothing like the State to take an idea to scale.

Credit for this concept really goes to my man Frank, who as far as I'm concerned coined the phrase: Investment Activism.

For those who are already engaged in their community though some existing apolitical service organization (e.g. clean the river, feed the hungry, teach the children) it's important to realize that:

So there's no reason not to get hot and start juicing your scene. The actual number of committed participants that are needed to change the balance of power in this country is surprisingly small. With the right message, a little savvy, and some hard work and perseverance, we can run this shit.

Having proof positive that local networks can defeat established institutions, the question really becomes "what will we do with this newfound power?"

Some back of the envelope political math tells us there's majority support already for the following Good Ideas™:

All of these ideas will make life better in the world. They also all have broad support. The only real opposition comes from fringe political groups and the fattest of corporate fatbacks. These issues fit together as a messaging piece pretty well, and as philosophy and policy too. It's a consensus in the wings, and the best the other team can do is call us "hippies," which won't work. If we fight, we win.

Unlike any of this insider-DC "Unity" daydreaming (McCain/Lieberman? What?!?) this kind of agenda is good governance and has broad public support. Imagine that: giving the people what they want, and having it work out. "Democracy, eh?"

The only thing that's really preventing this kind of agenda from being implemented is a lack of political will from the institutional leadership.

But that's now a solvable problem.

It's time to stop waiting for our feckless national political leaders to ride in like the calvary. They won't. But if momentum can build on these fronts, politicians who know what's good for them will get in front of the wave. Those who stand in the way are now proven to be replaceable.

Cocksuckers at Greyhound were sold out, but my peeps over at the Union Square Alamo car rental spot hooked me up with a one-way run, so I got back home last night with Luke and Julia. I'm realizing I'm close to broke; been letting invoices slide.

I'm going to def launch into a redesign of this site soon. Stay tuned for that.

Ok... off to the Oakland greyhound terminal, one of the finest human-watching opportunities you can get.

Lucas and Julia are up in Westhaven now. The Peach is safely back in Nueva Jorka. I've got a lot of catching up to do on work. Seems like projects are coming out of the woodwork, people wanting to know what my plans are for the fall, for next year, forever...

A little bird told me that DC dems are going to throw another 8-figure sum down the toilet to try and make a national voterfile. Stop trying to be the borg, dudes. It's not who you are. Embrace decentralization and win!