Drupal 4.7 is pretty fucking kick-ass. I'm actually looking forward to overhauling my own web presence with it. Good job guys!

Welcome to the Century of States Rights

It's a day of celebration for fundimentalists and hard-liners all over the US of A. Samuel Alito, a man who opposed the admission of minorities and women to his alma matter of Princeton, has replaced Sandra Day O'Conner, the first female on the Supreme Court. The right wing political machine will churn up an increasing number of challenges to Roe v. Wade to the court over the next several years, as well as attacks on affirmative action programs, etc. The framework of federal standards for equality which was the legacy of the last liberal generation will be significantly eroded over the next few decades.

For all of us living in nice places like New York and California, Massachusetts and Vermont, this doesn't really mean all that much. The real action now is on the state level, and all the places I'd ever consider living have a pretty solid bedrock of progressive values. Over in Mississippi, where there's already literally only one clinic in the whole state where you can get an abortion, people are going to have a harder time, I think. Welcome to the century of states rights. Make the most of it.

On the national level the only issue is Presidential power. Should any of Bush's abuses of Presidential power be investigated or otherwise tested in court, there are probably four solid pro-King-George votes, meaning only one of the moderates needs swinging. And it will go to court. If by some miracle the Democrats are able to build enough momentum to force some investigations, I don't think it's likely that Bush will bow to any demands from congress. Any attempt to curb or centure his behavior will be fought to the end, meaning the SCOTUS, where he's got quite a little fan club going.

But I don't think it's very likely he'll be investigated, which is in some ways better. If no one presses the legal question, the imperial Presidency may just fade away, an embarassing relic of a turbulent time, like when we locked up all the Japaneese people in those camps in the desert. If it's ratified by the Supreme Court, that's real, a solid blow against the Republic.

The action now is in the states. For people who disagree with the radical right's view of what America should be (a legislatively-mandated Leave It To Beaver), the real task is now to build local organizations which can place progressive representatives in State Senates and Assemblies, resist crackpot citizen-initiatives, and begin pushing for local leaders -- from Governors down to Mayors -- to be innovative and bold in crafting good governance.

There are opporunities here, but States are going to be ineffective at regulating corporate behavior, which remains one of the greatest challenges of government in the modern era. I mean, Exxon pulls in significantly more revenue than even the State of California. So that's a problem.

Also, PFAW and NAARAL should probably go up on a mountain and figure out why they keep taking honest people's money.

You know, at some point you really have to reach back into the TR bag and reformulate the language of Trust Busting. High energy prices, driven by our meddling in the Middle East and a devistating hurricane season, are definitely hurting working Americans, even inconveniencing members of our vaunted "investor class."

Meanwhile, Exxon/Mobil has posted the largest profit of any US company: $36.13 billion.

Other oil syndicates should report similarly grand tallies for the year.

That's the invisible hand at work.

What is Bush Hiding?

An interesting theory on why Bush's wiretapping program couldn't go though the FISA court:

[T]he source of the intel tips is tainted. If you are generating leads from persons being held in secret prisons or if the info is obtained thru torture, then it makes it difficult to make a truthful declaration before a judge. Why not lie to the FISA court? That's called perjury. I suspect this explains the real motive for the refusal of the Bush Administration to go the FISA route.

This seems much more probable than the idea that Bush had the NSA spying on John Kerry, although since they won't tell us anything about this program we have no real way to know.

The Girth is in town. We met up last night and threw down a few. I've been fighting a cold, so was not really as animated and engaged as I hope to be. I was sort of distressed to hear him say there's some significant support for Bush's wartime-powers wiretapping defense within the Law School cotire.

Pawing around some borrowed internet -- sometimes the neighbor's signal comes through well enough to web-surf from bed -- I see that the groundlings are hard at work on the possibility of an Alito filibuster. This is good, but I also agree with Mr. Stoller, that the establishment blew it on this one, and that this "Fillibuster" smells like an act of political theater to keep the Party's base from tuning out in disgust. Particularly innefectual in all this have been the likes of PFAW and NAARL, who have made the Supreme Court a core part of their reason d'etre for more than a decade.

I go into this because I'm trying to design a career arc for myself, and being some kind of change-agent remains fairly important to me. Questions of how, where and under what terms to interface with established institutions (like the Democratic Party) are somewhat prominant in my mind.

Over dinner last night, Frank and Laura were talking about the possibility of leaving New York to start married life. Though it was a little surprising, it makes sense to me. Unless you're pulling down big money in Manhattan or you've got a pile of cash in trust or inheratence, it doesn't make a lot of sense to try and start a business enterprise or a family here.

Free Fax to a number of Senators to fillibuster Alito. It will take all of 5 minutes, and it can't hurt. If you don't want this weasely little creep to get a lifetime appointment to sit in judgement on the highest court of the land, clicky clicky. 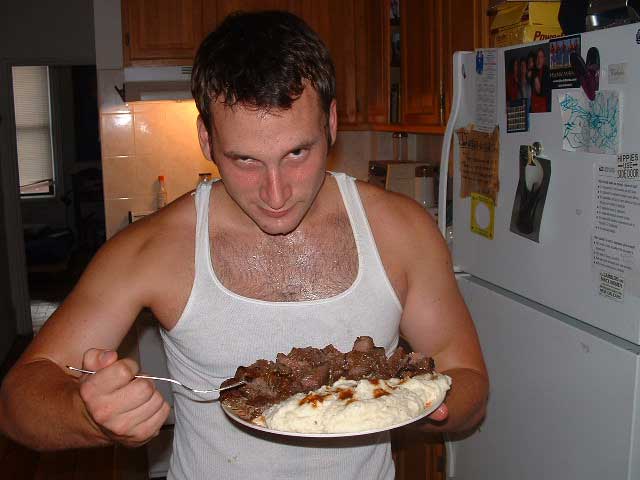 Representing perennial powerhouse, Hastings college of Law, he will eat the competition at The national Moot Court competetion just like he ate that plate of steak and potatoes.

To get yrself pumped up, may I suggest a quick... montage!

It's gonna be a show-down... goin' downtown, gonna mess around, showdown, put your nose down... SHOW-DOWN!

When the Enemy of my Enemy is my Enemy

This certainly is a little weird when you think about it. From the NYT:

Human rights organizations and the co-chairman of the Congressional Human Rights Caucus protested on Thursday a decision by the Bush administration to back a measure introduced by Iran denying two gay rights groups a voice at the United Nations.

In a vote Monday, the United States supported Iran's recommendation to deny consultative status at the United Nations' Economic and Social Council to the Danish National Association for Gays and Lesbians and the International Lesbian and Gay Association, based in Belgium.
...
Among countries with which the United States sided were Cuba, Sudan and Zimbabwe, nations the State Department has cited in annual reports for their harsh treatment of homosexuals.

Emphasis mine. Link found via Digby.

The official excuse is that these groups were once (along with one of my heroes, Alan Ginsburg) affiliated with NAMBLA, an affiliation which ended more than 10 years ago. By most accounts, NAMBLA no longer really exists as an organization, other than as a couple PO boxes and a website... and apparently as a convenient boogyman for justifying homophobic US diplomacy.

But it's nice to see we can see eye to eye with Iran, Cuba and Sudan in terms of keeping fags out of the UN. Nice job, Bolton.

Just watched the first 7 episodes of Boondocks. It's seems to be just finding it's stride, the timing could be tighter at times, but it's most definiately smart and most definitely art. The comedy pushes the envelope constantly, and the visuals are quite cinematic.

I, of course, enjoy the politics. I mean, the episode with the two whiteboy gangsters named W and Rummy, and W's voiced by Charlie Murphy and Rummy's voiced by Samuel L. Jackson, and he's shouting, "The absense of evidence is not evidence of absence!" and "That's an unknown unknown!" while on a spree of robbery disguised as vigilantism... that was fucking funny.

I torrented the pack of episodes because I'd been curious about the show (have enjoyed the comic strip) but then I heard somewhere it wasn't good. Since I don't have cable, I never saw for myself. But then I read this post by Steve Gillard:

Besides the gorgeous, anime-level animation, the politcs here are much more aggressive than in the strip. The word nigga is the least reason to complain about the show. The grandfather beats a man to death over an argument, Uncle Rukus is a self-hating black man who would surpass the clowns who work for NRO. In short, there is a lot to dislike about the show.

But, the fact is that this is the first time a non-rapper, non-novelist gets to have a forum to discuss black life from someone under 50. This is a nearly unique perspective on modern African American life and it is not comfortable at times. But it is not ignorant either. It is extremely well thought out and makes points in a way which need to be made.

That sounded interesting, so I decided to check it out. Ironically, Steve's blog post was in response to Al Sharpton asking Aaron McGruder (the creator of the show and strip) to apologize for a recent episode which I have not seen that they did with Dr. King. So, you have me getting turned on to a show because Al Sharpton called for the creator to apologize for the show being offensive. Fucking postmodern, yeah.

Anyway, enjoyable comedy. I heard they got renewed. Many happy returns to McGruder and cheers to Comedy Central Cartoon Network (thanks Stephen... it's all bittorrent to me) for taking a chance on something nonstandard.

The City of LA is suing Take Two Interactive, parent of Rockstar Games and publisher of Grand Theft Auto, after a sexy easter egg was uncovered in San Andreas. Here's the bit that threatens our children's sanity. It's not even titilating, and I like that it includes the message "Nice guys finish second," which is a good idea to spread among the gaming youth, and IT'S TOTALLY RIDICULOUS THAT THIS SOMEHOW REPRESENTS A CRIME.

Oh, and Rockey is running for State Attorney General. Coincidence?

And he's a Democrat. Nice work picking up Joementum's methodology. Way to dump on the future of your party, guys (see below).