Man I need a massage. I've been driving hard and fast for the past five days and living a pretty two-fisted life for quite a while longer. The fatigue is beginning to concentrate into poisonous pockets, mass tension in my back and neck, the kind that gives an almost nausia-enducing sense of relief when explored. Not a lot of fun to move. Need real rest. Just 48 more hours to go and then a pause. Bear down, Koenig. Bear down.

Everything Was Beautiful and Nothing Hurt

Axiom went of in grand fashion last night. Truly a Saturday-worthy party. It was a bad grey rainy day and so I had Sam bring in some palm trees we'd made together up at DiCapo Opera about a month ago. As everyone trickled in, the flavor got to be just right and we rolled with it. All in all, the experience once again vindicated my long-held belief that Performance should be considered good until proven shitty, and not the other way around. Generosity abounded.

The atmosphere was friendly, but also had moments verging on the revolutionary. Frank and I set a tone early with our quasi-political pomo comedy routine which incorporated a little scene by Wonk Web Celeb Billmon. We were basically talking about our own amateur wonkishness vis-a-vis that of a true warrior, and we included a scene Billmon wrote that we thought was kind of fun. Billmon took video, so maybe some of that will surface. We were experimenting with getting into political territory without making anyone uncomfortable, making it something that people can then talk about, pioneering.

But as it turns out, we were probably a bit more timid than we had to be. Joe Felice brought some great guitar noodling to add to his high-energy activist rap and really lit up the air. Sam Tressler invoked the Boston Tea Party and trash-talked the IRS and the state of America to great effect. Frank Boudreaux read a powerful and thoughtful exploration of the pro-war mindset; almost chilling. On the whole I was a little surprised but mightily heartened to see that my art people were engaging with these kinds of Big Questions with such passion and grace. I was glad Emily's friend who's working on the Dean campaign could make it and see that there's some really good creative energy waiting to bust out.

Plus there was a lot of regular show that was just plain quality. Becky Poole and Noele played some really quirky comic songs (part of something they've got going for fringe) and Nick Capodice read two short and powerful poems. Fellow Meekerite Wes yukked it up with tales of being temp worker and Julia resurrected an old piece that talked about her relationship with Jesus as a child. Jeremy's cute co-worker Jessie read a poetic prose head-trip -- and drew on her hands with a magic marker -- and my friends Melissa and Casey read some letters from jail courtesy Eddie. Everything was quite lovely.

I made my closing remarks (good bye, I love you, keep working on the good stuff and don't be afraid to instigate) and we partied it out for another hour at the space, then moved it up to the Lyric for the afterparty. There were some problems with the DJs -- amateurs, it seemed -- but the crowd was right. Jessie showed up and we had two or three conversations and some good human fun. The drink flowed as we all talked politics and pool and summer plans. Before we knew it we were in real after-hours territory. As things came unravelled I walked home with the sky growing light and felt good about the possibilities.

Frank woke me at 8, forgot one of his bags so I ran it to him, and now I've just got the task of getting the apartment cleaned and my personal effects packed. There's a lot still to do, but I think I can handle it. Yes, I can handle it.

That AMAZING ROCK AND ROLL BAND Broken Social Scene is playing again tonight at 11. I'm thinking about going, and you should too.

Also, Frank and I are working on good art for Axiom, which is tomorrow. It's going to be wonky fun!

And a thought as I scarf down a big mac: fast food, like any other drug, is fine as long as you use sparingly. We'll see what happens when my guts react to the 65g of fat though. Instant gastro-hangover.

It's happening. I had amazing meetings on wednesday with Music For America and then a marathon session at Britt Blaser's with Dave Pentecost and Joe Plotkin from bway.net. While at Britts (amazing view... reminiscent of when I lived on Water St. in college) we also did the hack4dean IRC meeting, and people are coming on board. A quick note on language: hackers are good guys. They make things with technology on an informal and independent basis. Benjamin Franklin was a hacker. They're not scary or malicious.

And in conversations yesterday and just in the air, I can feel the potential. It's electric. We are going to allow something truly beautiful and amazing to happen. More on this soon.

Oh! and on this note, there's already someone working on the RNC. This is good. I knew I wasn't alone on this, but now there's proof.

Here's the update on life stuff. I have gotten my health back more or less, and my head seems clearer than it's been in a long while. Tuesday I hung out with Sasha for a bit. It's still very hard to have a normal conversation, everything in limbo. But the resolution was good. It was kind of like closure, except that it left everything open, and there was a little huggin' and kissin'. I've got the internal gyroscopes back on line though; no longer casting about in despair.

Wednesday I spent almost all day in politics-related meetings of one stripe or another. See the above for more on that. Personally it's been an interesting ride, a good buzz. Feels heady and full and fun, like the right thing to do. Rolling around the humid pre-summer city on my bike, head bursting with purpose, it was a fulfiling day on many levels.

Wednesday night I stopped in at the Lyric on my way home, see Jeremy, I thought. Well, he had some of his co-workers from Shakespeare and Co. in, and one of them was pretty cute so I stuck around for a while. Until 3:30 am. Nothing came of it, but it was good to flirt again. I'm so far from having any "game" at all, it's almost comic, but it's nice to know I can still carry on a conversation.

Yesterday was hangover-hangover late-late train-train Westchester, meet, eat, meet, land life-sustaining work (yes! rent will be paid!) and train-train meet-meet (with Steve about the addiction book), then AMAZING ROCK AND ROLL SHOW. Broken Social Scene. See them. Hear them. I felt like I was seeing Pink Floyd and the Pixies before they were superstars. Amazing music, the stuff that gives hope. Then it was back to brooklyn and a few drinks at my old hunting grounds The Williamsburg Publik House: network-network loud-loud oogle-oogle, bike home sleep.

Bad sounds are eminating from occupied Iraq. Someone fragged a couple GIs at a gas station, which we know about only because a photographer happened to see it go down, and another GI was smoked in a drive-by. But don't worry, because as Bush's banner said, "Mission Accomplished."

Meanwhile, on the other side of town, we opened fire on a crowd of unemployed ex-Iraqi army people who were protesting the state of Iraq, killing at least two. They were throwing rocks, apparently. The solders haven't even pretended that they were shot at, which to me calls to mind Kent State. Probably not such a good analogy what with the imperial occupation and language barrier, but still, it's the first time we've admitted to firing on protesters without claiming they shot first.

It's getting hotter and hotter in Iraq, and it would seem that hearts and minds are turning. Laying off 400,000 people with military experience might not have been the best idea. It's not this bad everywhere, but it does seem to be bad enough to ask again why we're doing this and what the plan is to remove our footprint from the region. Or maybe we're not going anywhere. There's already talk of perminant bases in Iraq... it makes one wonder if anyone in charge read any history earlier that WWII growing up.

On the other hand, there are still some real freaky radicals out there giving me hope and humor. These people are hillarious, mixing up Marxism, underground samizdat and hipster electroclash into a pop-art political gag frenzy. Entertaining.

So you've probably already gotten the message a few times, but in case you have not, I would really like it if you would all sign up for the MoveOn primary. MoveOn is a great political action organization that started in opposition to the directing Bush took things post 9-11. They let you send emails and sometimes free faxes to your representatives, and periodically create petitions and surveys. They also fundraise from the grassroots with great efficacy. If they were to pair with the Dean campaign, it would be a big leg up.

It's free, and they rarely send more than one action alert a week, and its usually worthwhile stuff. Once again, click here to register. You will recieve an email with a unique link sometime on June 24th-25th which will allow you to cast your vote. It's takes less than 120 seconds to sign up and less than 60 to vote for Dean when the time comes. Do it.

At the insistance of my friend Jessica, here's a picture and a letter from her puppy: 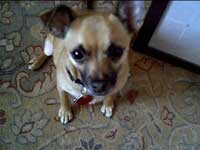 Deaw Unkul Joshua,
It was vewy nice to see you again. I liked being in your back yard. but I was sad you did not have on the big fluffy hat you wore when you came to my house this past winter. That is ok. To make up for this terrible travisty I suggest you rapidly place the picture of my mommy sent you on your website IMMEDIATLY.

Well, she is one cute puppy, though I must confess I've always been more of a cat man myself. So there you are; 15 kilobytes of fame.

Noted military expert (years of role-playing, anyway) and one-time war-letter corresponder Steven Den Beste of the USS clueless has an interesting post today about how we aught to go about rebuilding the Iraqi army. It all sounds pretty solid actually, but this line struck me as a little out of place:

There are also major cultural problems. We have to break them of their unwillingness to fail, or to admit failure; we have to instill in them an American attitude towards admitting mistakes so that they can be corrected.

Ah yes, that vaunted American attitude towards admitting mistakes, so brilliantly on display by the current administration amid the WMD scandal. Though I've long sense concluded that Den Beste is somewhat delusional or at least irrationally emotional wrt patriotism and love of country, he does implicitly make a valid point. Democratic leaders admit their mistakes. Trueman said "the buck stops here." Kennedy owned up to the Bay of Pigs. Humility and a willingness to be open and honest with the public are hallmarks of great democratic leaders. It seems clear that the crowd we have in office will never admit to doing anything wrong. I don't know if it's born-again self-righteousness, simple myopia or a truly sinister willingness to manipulate and deceive, but whatever it is, it's one more reason these people have got to go.