I have a few gadget-type purchases on my list. I already got the big ol' external hard drive, so cross that off (and color my system backed up for the first time in years). The next things are an LCD monitor and some portable music solution.

The monitor will probably wait until the new year, but the tunes I could use sooner. The cold season has begun, and music is essential fuel for biking in inclement conditions. I've been leaning towards the Shuffle, because it's simple and cheap and seems to fit my needs. I'd have to spring for some different headphones too -- tired of letting Apple brand me, dammit.

This is a draft. It is not final. However, I'd like to get comments from people, tips for contributions, ideas for things to look at, etc.

It's a bit dry at the moment; thinking what we may need is an introduction framed as a letter to potential contributors. But it's a plan of sorts.

Mike and I will be working on this more and making more noise about it as things move along.

I'm going to rap here a little bit, and as a starting point I'm going to pick a couple sentences from TPMcafe, where Matt Yglesias reveals himself to be the left-wing commie pinko we all suspected:

Record companies and their movie studio allies have managed to convince a shockingly large swathe of opinion that the purpose of intellectual property law is to prevent copyright infringement. In fact, the purpose is to advance the general welfare of society. Infringement should be defined, and the law should be enforced, in a manner designed to improve overall welfare. There's essentially no reason to think that a hard-core crackdown on file-sharing programs would achieve that goal.

Matt, of course, is right. And he's not really being a commie pinko here. He's being an American.

This is a pretty core piece of thinking to develop: the notion that Profit and Social Value are distinct things, and that the purpose of Law (and by proxy the State, which exists in large part as a living instantiation of Law) is to maximize the latter rather than the former.

This is something we lost somewhere along the way, maybe while we were fighting the commies, maybe when our elites -- the educated, upwardly-mobile middle class -- felt the pull of stock options and ever-expanding portfolios of wealth. It certainly was dealt a serious blow by Ronald Reagan and his lofty (and deeply duplicitous) rhetoric of "trickle down" economics.

There are millions of Americans who think they're smart and "realistic," but who really just have a dangerously narrow understanding of what Adam Smith was on about with his breakfast table metaphor. These misperceptions have been furthered by a school of economics which has been supported, propagated and venerated -- essentially as "useful idiots" -- by a malignant corporate business culture which seeks to escape regulation and gain access to new markets under the auspices of "free trade," while simultaneously maintaining privileged status through multi-million dollar lobbying, subsidies, bailouts, lopsided treaties, monopolies, syndicates and cartels.

Want an example? Why couldn't Red China buy out Unocal? Free market ain't so much fun when there's a bigger bully on the block, eh pancho?

It runs deep. I once had a debate with very wealthy, very smart, very progressive man I know in which he said we had no choice but to allow US corporations to utilize the products of slave labor, because if we didn't we'd be constraining the ability of our corporations to compete. Essentially, we have to make use of slave labor, or someone else will. Granted, I sort of backed him into that corner, but that's a mindset which exists, and it's incredibly pervasive.

Wake up! It's time to redistribute the wealth!

Well, that's a bit provocative. Really it's time to distribute (and to decentralize) the Power. Some direct wealth redistribution -- adjusting the tax code, investing Publicly in infrastructure, making sure no one goes hungry who doesn't want to -- is necessary as a catalyst, and the likely source of this catalyst is the central government. But the objective is to make sure that Power is distributed more evenly, that it isn't institutionalized in an oppressive configuration. Do this, and the question of Wealth will sort itself out over a generation or two.

I think we're ready for it. Our current decision-making systems are manifestly failing. Our social elites are proving themselves largely unfit. In spite of our fear of one another, if individual human beings were to sit down around the table and explain their positions to one another without any demagogues there to stir up polarizing dissent, we could probably reach some powerful points of consensus in short order.

Corporations have to die. I don't mean they need to be eradicated, but they're currently constituted as immortal institutions which accumulate financial gravity for ever and ever and ever. That can't go on.

Maybe there should be some kind of life-cycle, where after 100 years if your corporation is still around and kicking, you have to go through some sort of transition. Maybe when a financial empire assumes the size of a state or country, some additional responsibilities kick in; with great power comes great responsibility and all that jazz. I don't have a solid answer here, but it's clear we need to address this.

We have to break out of the institutions which unnaturally polarize us. Political parties -- and their associated opinion outlets and advocacy organizations -- do this, as do Big Jesus, Ghettos, Universities and a lot of other institutions which are important, but which set up false barriers between us.

Tall order, I know, especially given how fallible human beings tend to be. But it's not like we've got many options. Solidarity doesn't mean everyone has to love one another, even that we have to be friends, just that we realize on some level that we're in the universe together and we have a lot in common, and there's very rarely any reason for killing or brutality.

Zesty Ping posts the Top Ten Reasons Gay Marriage Should Be Illegal, which is delightfully snarky.

This is one of those issues where we just have to wait for the irrational fear to clear away, maybe for some older folks to just give up.

What better way to comemmerate our savage betrayal of this land's prior inhabitants than to gorge ourselves catatonic? It's the American way. I can literally feel my guts distendeding under the strain of yesterday's excess.

I'm not one to quibble with tradition, and good eats is good eats. Julia did it up right and I'm sure she's enjoying FOOD FOR DAYS. It was a nice urban family thankgiving with Luke and Steve, Beth and Ryan from Capones and Julia's little brother Pat and some of his friends who are all confidant and 19, like we all were at one point. We managed to suck down the bottle of Laphroag I brought over and had a good old time with football and conversation. Made my way home in a daze, booty-text-messaging. What a wonderful holiday.

In other news, I took up re-reading Sometimes a Great Notion, one of my all-time favorites, and it's putting that pioneer spirit back in me. "Goddamnit, we'll whup 'em. We'll whup this swamp from hell to breakfast." How can you not love that?

Batten down the hatches, internetistas, because you're about to get hit with something you just might not be able to handle: 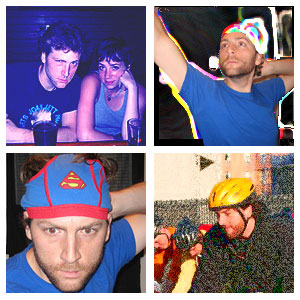 The man, the myth, the legend; my friend Frank is blogging. And it's good! Here's a typical entry:

Man oh man, Little Giant is about the best freaking thing on earth. I got to know one of the owner's Tasha, when I had this odd job working at the bar/cafe called The Cellar. She and her boyfriend used to come in cause they lived on the block.

Check it out for coverage of everything in the FER5 lifestyle: alleycat racing, dog co-ownership, and the ins and outs of New York livin' for the ever-thinning margins of us without suits, trust funds, or eurotrash accents.

The latest in blue/red cartography:

It's about a year late, but politics is a long game. I'll take it. Let's make sure this means something.

Anyone using Internet Explorer on a PC should just stop:

Exploit code for a critical flaw in fully patched versions of Microsoft Corp.'s Internet Explorer browser has been released on the Internet, putting millions of Web surfers at risk of computer hijack attacks.

The zero-day exploit, posted by a U.K.-based group called "Computer Terrorism," could allow a remote hacker to take complete control of a Windows system if the victim simply browses to a malicious Web site.

I get a buck if you install it. Beer and skittles all around!

Hrmz... Google seems to be serving the wrong advert. Get Firefox Anyway, even if I don't get a dollar

Anyone using Internet Explorer on a PC should just stop:

Exploit code for a critical flaw in fully patched versions of Microsoft Corp.'s Internet Explorer browser has been released on the Internet, putting millions of Web surfers at risk of computer hijack attacks.

The zero-day exploit, posted by a U.K.-based group called "Computer Terrorism," could allow a remote hacker to take complete control of a Windows system if the victim simply browses to a malicious Web site.

I get a buck if you install it. Beer and skittles all around!

Hrmz... Google seems to be serving the wrong advert. Get Firefox Anyway, even if I don't get a dollar

Jeff Jarvis and Bill Quick have a flamewar over the Pajamas Media/Open Source Media debacle.

Quick primer: a bunch of right-leaning writers, many of them online, are "Taking on the MSM" with a funded venture into online news and reportage. It feels a lot like dot-com hype from what I hear, and I think their take on things -- apparently the NY Times is the root of all evil -- is off the mark, but whatever.

Anyway, their whole launch process has been a rather humorous fiasco. This is a strange experience for me, watching people who are professionals, my elders and alledged betters, get bogged down in the quagmire of startups and flamewars.

This is another reason why I think The Book is potentially pretty important. We can lap the greedheads and power-junkies in a minute if we get aligned and in motion. They're lazy. They're not all that smart. They don't really Get It at all. So fuck 'em, I say. Let's do it better.