This wonderful woman is replacing Tom Friedman, and putting fucking Maureen Dowd into contrast like the out-of-touch Grand Dame of the Hepburn wannabes that she is. Ehrenreigh wrote "Nickled and Dimed: On Not Getting By In America" and worked at Denny's-level jobs for good while to get the research.

The Moustached One is out for three months. Babs will be slinging the real dish through the end of September. I like the way that sounds. Out with the liberal Hawkishness (now in full on retreat) in with the smashing of brittle and unproductive faux-conservative ideology. We got reconstruction to do.

Saddam Hussein will appear before an Iraqi tribunal today, Bloomberg Europe is reporting.

This is the first move since we left town a little ahead of schedule a couple days ago. Close associates say L Paul Bremer returned the keys to his palace room, but "probably won't be getting all of his security deposit back," as the country is roundly regarded to be materially non-improved over it's pre-invasion state. Tough luck there, Jerry.

But fear not, Hussein's court case is a chance to turn over a new leaf. According to the Iraqi Condi--I mean National Security Advisor, the courtroom drama would, "demonstrate to the outside world that we in the new Iraq are going to be an example of what the new Iraq is all about.''

The venue for the hearing hasn't been revealed and only a few journalists are being allowed to attend. Video footage of the proceedings will be made available to the media, the U.S.-led military coalition said.

Hmmm... that's curious. You'd think that if this were really a demonstration to the world they would, you know, invite the world to come and see, not just stand around waiting for some dude to bring back a report on what was going on. If this is an Iraqi trial demonstrating the vurtue of the new Iraq, then why is the Pentagon one doling out access and video?

The likely stock answer is that it's about security. I don't think I buy it. For starters, it's not like you're going to be able to keep the locaiton of the trial secret. If Insurgents want to shell the thing, they'll do it, ok? They shot mortars into the Green zone every week. It's not like you can really stop them. Security through obscurity doesn't meet the military standard.

The likely second answer is they don't want to give Saddam a pedistal to grandstand on. Ok, but hold up; don't the people over there hate this guy? I mean, wasn't he a fucking dictator who starved them, sent them into a senseless war with Iran, gassed them, let his psychopathic sons run free in the streets of Baghdad and generally make every moment of life a living hell? I think he was; so why not let people see the man on trial unfiltered? By all accounts, his reign was almost as dependent on media manipulation as the Bush Gang's, so putting him on the spot and out of costume would be just the thing to let the people of Iraq see him as mortal and get over the whole thing. Maybe that Irish reporter can grill him too; that should finish the job.

No. My nose tickles and what I smell is fear. The CPA people know they've screwed the pooch. No matter what the people in Iraq thought of Saddam after the invasion, they mostly dislike the US now too, and they're starting to remember the good old days too. This is scary for the US.

Look, our poeople know Hussein's a powerful figure, and they know they fucked it up. They're afraid he might touch a chord. After all, this is the guy who ran the country singlehanded for about 30 years. He took a beuraucratic state party apparatus and turned it into his little Stalinist playground. Sure that's fucked up, but ask any honest historian what the Russian people thought of Stalin. There were a lot of people who really liked Uncle Joe, dispicable man that he was. Our people over there, Ambassador Negroponte and whoever else they've got over there pulling strings and cutting deals, they're afraid some of that old Hussein flavor might make a comeback.

For Saddam's part, it's his only out. If he's not broken out of jail by crack Republican Guardsmen or popular revolt, he's going to be put to death. All he can do is call for the people to rise up. Only card the sleazy mofo has to play, and don't doubt that he'll do it.

And that, my friends, is why we've got to let him do it on TV. He's got to call for it, and the people of Iraq need to turn his ass down. We need to line up a string of the most poetic, folk-hero, neighborhood-leader Iraqi citizens to get up there and shoot him full of fucking holes. (update: I'm speaking metaphorically here; they should shoot the idea of his appeal to the people of Iraq full of holes. Not his body.) We need truth and reconcilliation in Iraq, and that means the people there deciding to bury their cruel old master for themselves.

If they can do that, they'll soon have no need for us. That day can't some soon enough.

A blog after my own heart: Winning Argument. Great formula: why you're right, why they're wrong, a better idea. It's kind of ripping off O'Reilly, but hey, talking points work. Glad to see someone's flexing the logic.

For some reason this Partisan Jab hasn't caught on yet. The first one's had over 10,000 views, but this one just a few hundered. Huh. Internet. Go figure.

It's funny, especially in light of recent news.

This is totally fucked up. It's the Microsoft e-book of the Constitution. You not permitted to print it.

So, you can now see online, video of my talk at the INVOLVER press conference we gave last week. It's on involver04.org. There's no comment function over there -- the idea is that all the chatter will happen more local, like here. Point being, if you have two cents (or more) to chime in, this is a place to do it.

I'm going to make something a little more developed out of this soon. Maybe spruce up the powerpoint, lay down a more rehearsed narration; you know, keep up my unabashed aping of Lessig. Maybe this could become something. It might be fun. Could be a ticket to ride.

I see little choice but to go all the way with where my life is heading as of late, to plunge in with both feet, both arms too; head, heart, soul, etc. We talk a big game about bringing our whole personalities to the equation, but for my part I haven't been doing much of that lately.

Part of it is just the natural result of working long hours in an office that's an hour commute both ways. Work often consumes more than 50% of my living hours, which doesn't leave a lot of waking time to be a healthy, well-rounded individual in. Part of it is that I lack some of the outlets I'm used to having. Part of it is just plain atrophy.

Boo hoo. Poor Josh. Ho ho ho. It's not a sob story, it's just a look at how things have been. A look back, savvy? 'Cause things are starting to change. We're gonna cut loose and have some fun with this mutha.

Summer is on, in the air as well as by the celetial calendar. There's a change in the air; it feels like we're going to win this fucking thing, the tide will be turned back, and if we can hold the tentative and newly-minted alliances together in the post-Bush era, real world change the world change may be possible. Progress is back.

For my part, we had a raging big party last night. Fun times, playing host and running the grill and the blender. Annata, my late-night companion of late, was here, and that was good. I worry a bit about my wandering heart, but then I remember that worrying doesn't do anything but make me worried, that there's stress breeds stress and the best thing to do is to let one moment follow the next like it was meant to be. The most important thing is to stop struggling. Life will be what it is, and right now it's good. I'll take it.

That's me in there with Molly, Jared from the Knit, plus two guys named Kyle and Chuck who you may have heard of.

I shook hands with Chuck D... this reality has yet to really sink in.

That's me in there with Molly, Jared from the Knit, plus two guys named Kyle and Chuck who you may have heard of.

I shook hands with Chuck D... this reality has yet to really sink in.

Back from NYC and feeling absofuckinglutely beat. Everything is going good, but there are way too many moving parts at the moment. Here are a couple images flashed across my screen that I thought were interesting. 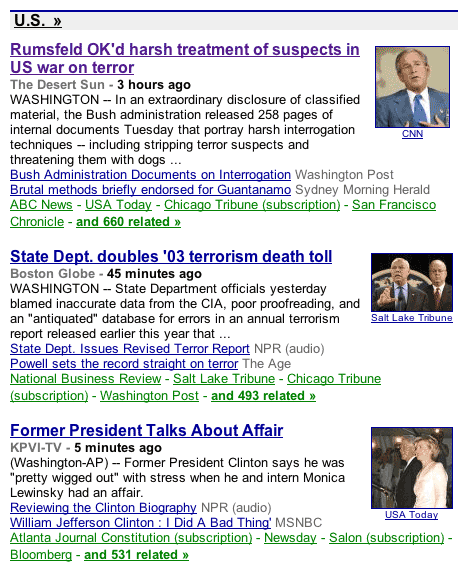 That cracks me up every time I see it.

So I'm a little stressed. Caught some of The Fear from the TV in the seat on JetBlue. They had a test program with Fox. You got FoxNews and three movie channels. I watched part of Princess Bride. Tried to watch part of Moulan Rouge (which I couldn't stand: too much fancy editing, not enough movie), and then caught Ann Coulter, Bill O'Reilly and Dennis Miller in rapid succession, plus a mega-softball Hardball interview with Paul Wolfowitz. Makes me wonder why there isn't at least one flaming lefty -- someone of O'Reilly or Scarborough's stature -- balancing all that commentary from the right. Oh well. TV is so 20th Century anyway.

We're having a party this weekend at my house. If you want to come, drop me a line.